Senate Bill 126: You down with this SB? Yeah, you know me… So you know that it is complicated.

There has been a great deal of interest in the distribution of local sales tax revenue in North Carolina in the past few years.  I will admit that as a scholar of local sales tax policy and effects, it has been an interesting time to be in the state (and made me much more popular!).  Not surprisingly, I have been having a lot of conversations with people across the state about SB 126, so I thought I would put some of my thoughts down on proverbial paper.

So why are we tinkering with them now?  Well, I will not say what is motivating our elected officials, but it is likely the concern over the revenue raising capacity, or lack thereof, of our rural communities in the state.  As with the previous proposals in recent years, and what we have actually changed, SB 126 primarily benefits our rural jurisdictions.  The concern is that it benefits our rural jurisdictions at the expense of our urban ones.

What are we actually talking about?

Well we are talking about changing the existing adjustment factors for Article 40 which were in place as a hold harmless from previous changes to that sales tax base to a different set of adjustment factors.  While this may not sound dramatic, it is for some jurisdictions.  Let’s talk about it from a county-wide perspective (so some of this revenue is the county’s and some is the municipalities within the county).  The proposed adjustment factor is not a reinvention, but instead using the area development tiers which have three levels; 0.9, 1.0, and 1.1.  The current adjustment factors give extra revenue to the counties with the greatest capacity for generating revenue, because it was a hold harmless.  These tiers are essentially/frequently the opposite of that, so in most cases if you have a high adjustment factor under the current system you are looking at a substantial decrease and vice versa. For example, Columbus County would benefit tremendously with a change in their adjustment factor of 0.29.  They currently receive 81.3% of the Article 40 revenue generated in their county and under the new system they would receive 110%.  On the flipside, Dare County will have a change in their adjustment factor of 0.49.  They currently receive 149% of the revenue generated in their county by Article 40 and would instead receive 100%.  My home county of Orange would go from 115.3% to 90%.  These are, in many cases, substantial changes.

In some cases these percentages may seem more extreme than they are and in other cases, perhaps less.  So in Orange County, using the county-wide numbers for FY16 that 25% percent change is a loss in revenue of just under $2.4 million.  For Dare County, which would experience a loss of 49% it is just under $1.2 million.  The gain for Columbus County, with its additional 29% is just over $1.1 million.  In contrast there are counties like Tyrell which would receive, county-wide, about $30,000 more.  And then there are Wake and Durham, which would have reductions of 24% and 6% respectively, and lose $4.8 and $4.2 million each.  ***These numbers are low estimates because of remaining Article 40 funds that would like be distributed in the same manner.*** 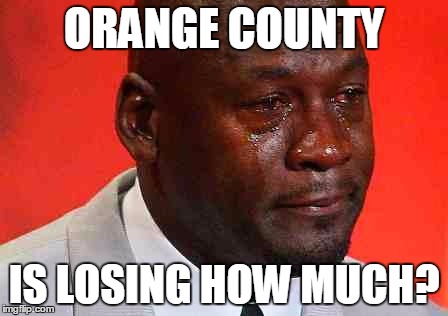 Are other states doing this?

No not really, though that does not mean much.  Local sales tax laws vary tremendously from state to state and the issue of fairness or equity with regards to them is nothing new.  There are only three other states that, like North Carolina, distribute a portion of the local sales tax revenue on a per capita basis and there are other states where other local taxes are shared amongst jurisdictions.  Perhaps the most famous is Texas’s “Robin Hood” program which was just found to be constitutional again.  Robin Hood is probably what you imagine, redistribution from the wealthy to the poor.  In this case via school districts and property tax revenue.  Of course, the most common way that states redistribute wealth between jurisdictions is at the state level with state revenues.

From the urban or tourism rich county perspective.

Many of you are frustrated.  You feel like you are being penalized from being a growing, if not thriving, area.  You understand that you do not (typically) just have bags of money laying around and that being more urban or having a robust tourism industry comes with costs too.  Some of you are acutely aware that you have made choices about zoning and development to build up your sales tax base and this feels like you are now being penalized for that choice because you would not receive the local sales tax revenue that you had been expecting.

From the rural county perspective.

Many of you are also frustrated, you commonly have high property tax rates, often high utility rates, and no more ability to raise local sales taxes.  You feel like you are maxed out on the capacity side, and yet you still do not have enough revenue.  You look to your urban neighbors and watch your citizens go shop and spend their money in those counties. Like I said there are no answers to be found in this week’s blog post, just more questions and considerations.  What are you all thinking about with regard to SB 126?  What other factors should be on this list?

There are two sides to every coin: Or is there Common Sense about Cost Accounting in Government?

Congratulations to our Tar Heels!