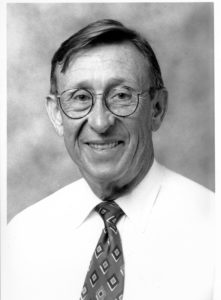 In 2003, Joe was honored by the NCAAO with the Henry W. Lewis award for doing just that. 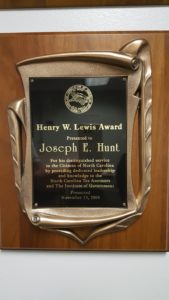 Joe did a lot of great things as a lecturer and adviser here at the School of Government from 1983 to 2009. If you were around during his tenure, you are certainly aware of many of those accomplishments. This blog post is about what Joe wrote in a 2008 IAAO Fair and Equitable article as being one of his most meaningful events to him, establishment of the North Carolina Candidates’ Club.

The club was started by Joe to encourage county appraisers to earn an IAAO designation with the help and support of others. In 1984, when the club began, I had very little knowledge that one day the club would lead me to one of the most rewarding career moves I would ever make. In 1995, David Baker looked at me while taking IAAO Course 500 and said, “Kirk, we need to get our PPS (Personal Property Specialist) designation.” I agreed.

The PPS designation requirements changed over time. Dedication to the goal changed. My available time to work on the designation changed. The NC Candidates’ Club was always there. Club members were a constant reminder of the goal, and the resources available to help me get there.  David and I encouraged five others to join us on this elusive quest. One reason that all candidates will attribute to a designation’s elusiveness is committing to an exam date. If your designation requires a project, such as a demonstration appraisal report, that is certainly a big hurdle. But almost all designations require a long, intimidating exam called a case study exam. They typically take most of the 8-hour time limit. Seven club members committed to a week that we would retake IAAO 500, study in the evenings, and take the exam together on a set date. It was not without struggles, but the point of the story is that the 7 of us stuck together.  Today the 7 of us have our PPS designations and all 7 would admit that the journey was well worth it. In alphabetical order, the group is David Baker, Kirk Boone, Tammy Holder, Tom Tucker, James Tyner, Tina Stone, and Mary Yow. Since earning that designation, the entire group advanced in their careers in various ways.  North Carolina had enough designations that year to win the 2006 Virginia Cup.

It is time to renew and revive the goal of earning an IAAO designation! The Candidates Club Officers, including current president, Harry Smith, are ready to push you. Great job on that video Harry! I’m ready to push you, and probably join you for another designation myself.

Please read the challenge Wake County Tax Administrator, Marcus Kinrade, gave to his staff. He challenged them to earn their designation and help Our State win the 2019 Virginia Cup. I think that plan is right on target and I hope other assessors will follow Marcus’ lead. Will you?  The candidates club website is updated, the officers and members are ready to work with you to earn your designation. There has been recent excitement in our discussions. Let’s be a part of winning the 2019 Virginia Cup!  Here are upcoming courses in North Carolina.

Share your own designation story below, ask a question, or just let everyone know that you’re ready for the challenge that may very well define the rest of your career!

A Reappraisal Citizen Advisory Committee, would it work?