It was an (im)perfect illusion: Fiscal Illusion and You

Fiscal illusion, sounds catchy doesn’t it?  Does it sound more like something you would read about on an ophthalmology website than a blog on taxes?  Well, that is where you are wrong.  Fiscal illusion is a hypothesis surrounding the notion that citizens systematically misunderstand their true tax burdens and the benefits they receive from government-provided services. In other words, they do not understand how much they pay in taxes or the value of the services that government provides.

At the start of the last century, economist Amilcare Puviani hypothesized that the ruling class designs public tax and expenditure policies to minimize resistance from the dominated class. To do this, the ruling class intentionally overstates the benefits that the dominated class receives and tries to obscure the tax burden so that this dominated class will underestimate it. In democracies, this is usually born out when public officials try to make tax burdens appear lower than they actually are. Figure 1 shows what happens when citizens underestimate the cost of government and how much they pay for it. 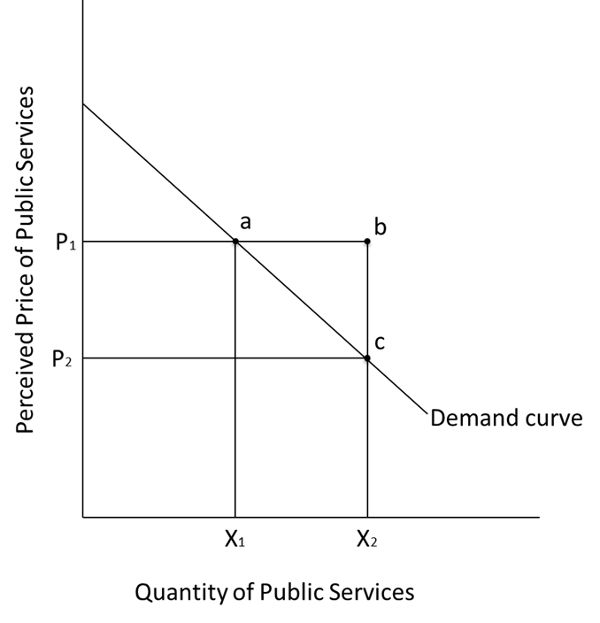 Okay, so let’s translate that again.  Citizens think that their services cost less than they do.  Why does that matter?  Well, it matters because we consume more if it costs less-think groceries.  In this case, if we think government costs “P2” which is less than “P1” then we will demand more of it.  Think about this in practical terms.  If your government could add additional covered bus stops at a cost of $10,500 you may say let’s add four more.  However, if they really cost $17,000 you would likely add fewer and may not add any at all.  While citizens may not have an exact price in their mind, it is the same idea.  They do not understand the cost of government and leads to irrational and suboptimal preferences.

The literature generally finds that elected officials have in fact created, intentionally or not, fiscal illusions that cause citizens to underestimate their tax burdens and demand more public services than they would if they had a more accurate perception of their true cost. One primary cause of fiscal illusion is the high cost to citizens of compiling accurate information on their tax burdens and of government expenditures. This is especially true with less visible and indirect taxes; an oft-used example involves property taxes versus excise taxes. Property taxes are highly transparent. The amount that must be paid is clear, and citizens are able to easily understand their burden. In contrast, excise taxes (like gasoline taxes) are included in the cost of goods, and taxpayers may not know what portion of the price the tax constitutes or even that they are being taxed at all. Also, the overall expense of an excise tax is harder to track, as these taxes are paid over time in small increments.  This in part explains why property taxes are so much less popular than excise taxes, because people truly understand their burden.

Another contributing factor in fiscal illusion is that since a citizen’s tax burden is spread out through the entire year and over multiple tax instruments, it is difficult to keep track of the costs and therefore challenging to get a true sense of overall burdens. For example, today’s typical citizen pays income taxes (monthly/state and federal), sales taxes (daily/state, county, and municipal), excise taxes (weekly/federal and state), property taxes (annually/county, municipal, and school district), Social Security and Medicare (monthly/federal), and other taxes (e.g., inheritance taxes, user fees, license costs).

These underlying factors help to obscure the true tax burden of citizens and lead to an inefficiently high level of government expenditures. As a result of fiscal illusion, citizens pay more in taxes than they realize and would be willing to if the illusions did not exist. Tax burdens that are too high lead to excessive government expenditures.  This is why scholars offer fiscal illusion as an explanation for the dramatic expansion of the public sector during the twentieth century.

The disturbing trends identified by academics who study fiscal illusion are echoed by public opinion.  Despite there being more data available to citizens today on government activities than at any other period in history, trust in government is nonetheless at a record low (19 percent), while citizens increasingly believe that their government spends too much (76 percent) and that the tax system needs a major overhaul (72 percent). Results like these suggest that government is systematically providing a level of services that is not in keeping with citizens’ preferences. But while numerous tax policies and structures currently in place create and exacerbate fiscal illusion, there are actions that citizens and elected officials can take to improve the situation.

What to do? Over the long run, lawmakers may attempt to reduce the amount of fiscal illusion by simplifying the tax code, reducing deductions and exemptions, relying on more visible tax instruments, and mandating that different levels of government use particular sets of tax instruments. Not all of these actions are politically or economically feasible, however, and each would take time to implement. In the meanwhile, increasing transparency by providing citizens with information on governmental operations, policies, and management is a critical step toward rebuilding trust and promoting an efficient level of government. To be transparent, government must inform citizens as to (1) the scope of its services, (2) the reasons it provides those services and what their benefits are, and (3) how much those services cost and how they are financed. Such knowledge allows citizens to make well-informed decisions about their desired level of taxes and services. Transparency and citizen education are not simple tasks, and there are no universal solutions. It is clear that merely “dumping data” will no longer suffice, and as a result governments are experimenting with better ways to relay information and engage taxpayers. Citizen academies, taxpayer receipts, partnerships with Code for America, and interactive tools like Budget Hero, are innovative examples of attempts at citizen engagement in an age where citizens appear averse to fiscal issues and fiscal illusions are pervasive in modern American tax policy and law. Continued development of such tools will go a long way in changing citizens’ views about the benefits and costs of their governments’ approach to taxes and services.

This article is based on the paper, ‘Fiscal Illusion in State and Local Finances: A Hindrance to Transparency‘, in State and Local Government Review and portions of it are taken from A lack of transparency is leading to a fiscal illusion where citizens underestimate their tax burdens and the cost of government that was written for the London School of Economics’ American Politics and Policies blog.

© 2022 Copyright,
The University of North
Carolina at Chapel Hill.