y last blog I talked about the limitations that we all have on decision making and how we satisfice and make decisions based on incomplete information.  That is all true, but it does not mean that we should not strive to have a more robust understanding of the landscape we are working in.  To that end, I am going to be devoting some of my blogs to topics that are both interesting and important to understand for those working in government, especially those in budget and finance positions.  This week: tax incidence!

Statutory incidence is determined by who actually remits the tax to the government or who pays the tax.

Economic incidence is who bears the burden of the tax or in econ-speak whose resources (money mostly) are affected by the tax.

So let’s use a quick example to make this a bit clearer.  Let’s look at property taxes.  Imagine you have a small home in your community that is owned by the Smiths and occupied by renters, the Baldwins.

The Smiths are the ones who write a check to the county every year for property taxes—so they bear the statutory incidence of the property tax.  Does that mean that they bear the burden of the tax though?  Not necessarily.  Under the right conditions the Smiths may be able to charge a high enough rent that they are pushing the burden of the tax onto the Baldwins. In that case the Baldwins may be bearing (or a portion of) the economic incidence.

Hopefully that makes intuitive sense to you.  For those of you who like visual aids (or graphs!) let’s go back to the microeconomics you took in school.

***Note: the white triangle to the left of the tax burden (between the Q1 and Q lines) is what is called in econ-speak dead weight loss.  This means that the tax has created a loss for both consumer and producers that the government does not get in revenue.  This is bad and we want to minimize this loss as much as possible.***

Here you can see that the demand line (D) is more up and down.  This means that no matter the price most consumers that were going to buy it before the tax was imposed are still going to buy it.  Under this inelastic demand (not sensitive to price) consumers will end up paying more of the tax burden, thus the pink box is bigger.  In the property tax example, this may mean that there are a lot of people looking to rent a home and not buy.  So the Smiths can charge a higher amount because of the insensitive or inelastic demand for rental properties, leaving the Baldwins with higher rent.  The opposite would be true if there were a lot of rental properties and not many prospective renters.  Then renters/consumers would be sensitive to changes in price and property owners would be less sensitive and bear the larger portion of the tax incidence.

This issue of elasticity is the heart of tax incidence.  The question of who is most sensitive to price is what determines the incidence.  It is natural to ask “what if both groups are sensitive to price” is a fair question.  The answer is that the amount consumed of that good will drop a lot, not much tax revenue will be generated, and there will be a lot of dead weight loss.  The burden will still be greater on the more sensitive one though.  The flip side is what if neither party is sensitive to price?  Well then there will not be much dead weight loss (yay!) and as always the less sensitive party will bear greater burden.

So what if we want to tax one group (let’s call them Team A) more than another group (Team B)?  Well, then you have to find a good that Team A is less sensitive to changes in price than Team B.  This may be different in different jurisdictions.  It is not as simple as shifting the statutory incidence because it does not matter which side of the market you tax, the burden will end up on the same party either way.

There are almost no universal rules about who bears the burden for normal (typical) goods.  There are exceptions of course.  The classic being cigarettes.  Cigarettes are addictive and therefore the demand for them by the consumer is not very sensitive to changes in price.  Therefore the cigarette tax falls largely, if not completely, on consumers. 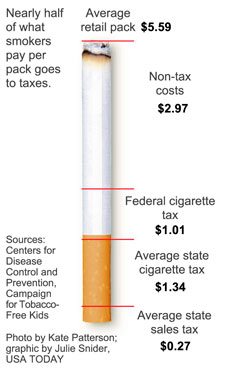 Are you thinking, well my community is going to depend on property taxes and it does not really matter if the burden is being passed on to renters or staying with property owners (or businesses/their employees).  Fair enough, but if you are living in a community and you believe that the burden is being passed on to one group, you may be able to change other fees and taxes to not disproportionately affect the same group.  It is also always valuable to understand how your taxes affect your citizens and if they affect different populations unequally.

In brief: What do you need to know about tax incidence?